Calvary Church had its Blood Donation Drive on Sunday, 24 April 2022 at the Calvary Convention Centre (CCC) after a 2-year hiatus due to the pandemic and saw an encouraging 131 church parishioners and the general public turning up to support the drive.

Organised by the Social Concerns Ministry of Calvary Church at CCC, the drive was to meet the shortage of blood supply during the fasting month at the National Blood Bank [PDN] saw a total of 95 successful donors. 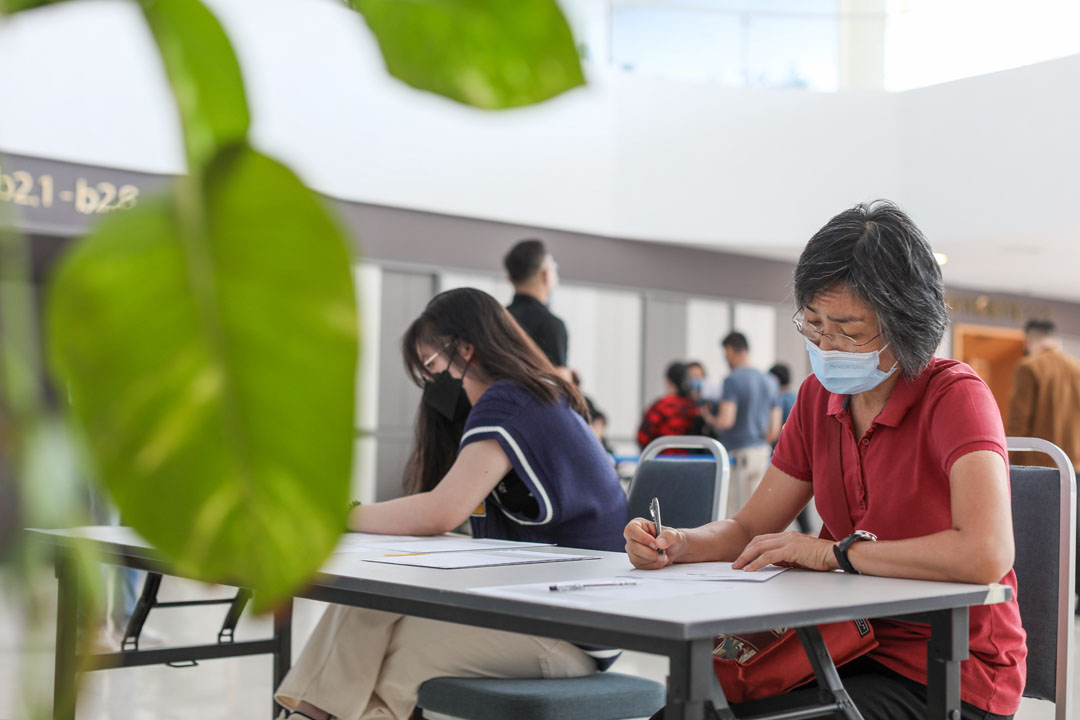 “We are glad that Calvary Church can be a blessing to the community and a support to the National Blood Bank during this time. The Lord answered our prayers and blessed our Blood Donation Drive event with such a good turnout,” said Wong Yih Mun, coordinator of the event.

“We are impressed with the entire set up. Everything was already done by the time we got here,” said Dr. Nabila. The hall is spacious and comfortable, and the process of registration followed all Covid SOP protocols. A special mention to Cherilyn Thong, who beat the odds to donate. Cherilyn has Tellesemia minor and never thought that she could ever donate her blood because of her condition. However, after meeting Jess who prayed with her, she stood on God’s promise in 1 Peter 2:24 - by His stripes you were healed - and boldly went ahead to take the test at the blood donation drive. She was elated when she was told that she could donate! Praise the Lord! Many donors expressed their excitement and appreciation for the opportunity to donate their blood again after the long break, giving God all glory and praise. It was encouraging to see many married couples coming together for a united purpose. Saving lives.

Robin Sim and Mee Hoe, who both served with the Blood Donation Drive organising team, were one of the first few to donate that morning. “We were excited to donate, especially after two years!” Another married couple, Lim Lee Lin and Lau Boon Kiat, both Kelantanese and regular blood donors, saw the venue for donation on the PDN Facebook page, and decided to come over to CCC due to the close proximity to their home. They used to donate at shopping malls, but found CCC to be more conducive, comfortable, and well organized. “It’s been two years since we last donated and we will surely return to CCC,” they quipped.

There were many first timers attempting to donate their blood and many of the Calvary Young Adults came forward to do their part in saving lives too. For Katrina Yeoh, who also donated for the first time, she finally ticked off this effort from her bucket list of ‘things to do’ to overcome her fear of needles. Victoria Choi and Micheal Loon, who have both donated before but are doing it again to encourage fellow friends, felt a sense of fulfillment. Lee Kit Ian, who has donated more than 20 times since he was 17, was motivated with the campaign slogan ‘one pint saves three lives’. He has been donating regularly and does not plan to stop any time soon. Ian even brought his neighbor Juanita, who is 50 this year, along to donate, and she too gave her blood for the first time despite her age. Following after the footsteps of her parents, Azriela George, 20, decided to give it a try this time and prayed that she would be eligible to donate due to her weight. “God answered my prayers and here I am,” she said. It was the same for Evelyn Saw, 18, who aspires to be a doctor but is afraid of needles. She said, “It was faster than I expected and it’s not so bad after all.” CCC’s all-time-favorite blood donors Stephen Liu and Bernard Lee were again placed next to each other. They want to encourage others to keep donating their blood while they still can. Calvary Church would like to thank all who have supported this drive and hope that they will continue to encourage others to also do the same, to save lives with just one pint.

The Calvary Blood Donation Drive team consisting of coordinator Wong Yih Mun, Yong Pek Chin, Leonella Gonzales, Robin Sim, Irene Lee, Jana Ponnudurai, Rex Teng, Aaron Kee, and Tan Wan Ling were encouraged by the turnout this year. The team is glad to be a blessing this annual event and were glad to be a blessing. They also thanked the church and the CCC management team for all the support in making this a smooth process from start to finish. The Importance of Connectivity
#DevotionTime
Welcome fourteen into the Family!
We thank God for the 14 believers who affirmed their commitment to Jesus through water baptism on...
Taking One Step at a Time
“The process of hosting 3Sixteen has taught me that sometimes when faith is small, and we do not kno...
Do Not Give Up
I was not sure about the genuineness of her faith knowing she tends to be very obliging. What follow...